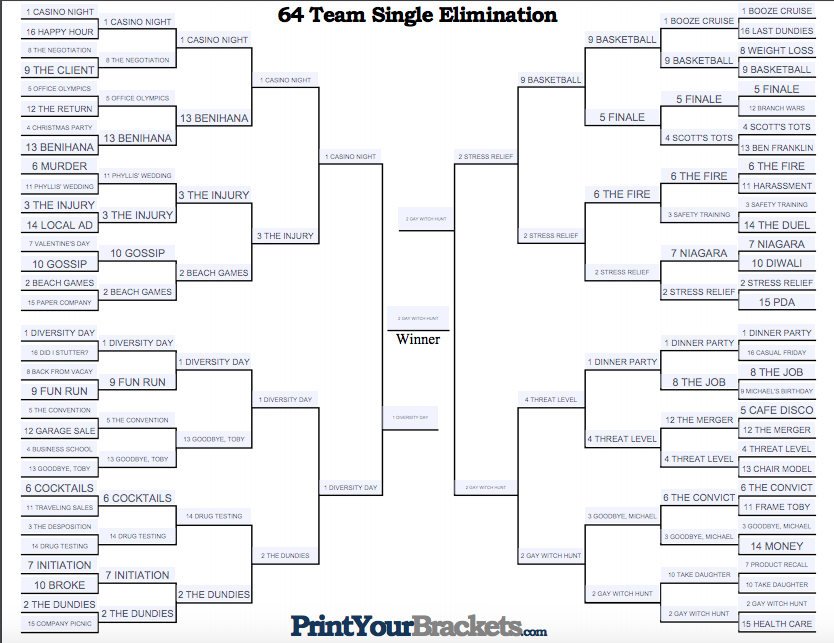 The Office is my favorite show of all time. And I know that a ton of other people feel the same way, especially since the show’s popularity has grown proportionally with Netflix over the past few years. While some diehards go back and forth over the best character (Michael is the only real answer) or the best season (2 or 3 are both acceptable), the debate that’s probably most up for interpretation is best episode.

There were 201 episodes of The Office filmed over the show’s nine-season run, and in the spirit of March Madness, I trimmed that number down to 64. No rules or guidelines were followed in the seeding – if the episode was one of the Top 64 in the catalog, then it made the cut. So that explains why “The Incentive” or “Trivia,” two of the better episodes from Season 8, didn’t make the cut, but “Ben Franklin,” one of the lesser episodes from Season 3, did make it. I considered Michael’s highlights and lowlights, impact on the greater story arc, and GIF-ability when putting the list together, but when voting feel free to follow your heart…or Michael’s personal philosophy of “don’t ever, for any reason, do anything, to anyone, for any reason, ever, no matter what, no matter where, or who, or who you are with, or where you are going, or where you’ve been, ever, for any reason whatsoever.” 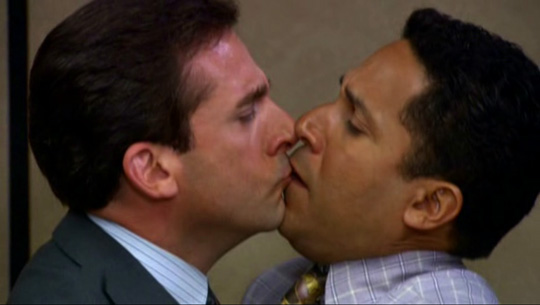 Thanks to everyone who voted! Now if you’ll excuse me, I’m going to rewatch the series for the 497th time.

A fun piece of trivia about DIVERSITY DAY is that…the episode was webcast on Myspace two weeks prior to airing on NBC as a promotion for the then-upcoming premiere.

A fun piece of trivia about GAY WITCH HUNT is that…the kiss between Michael and Oscar was completely improvised by Steve Carell. 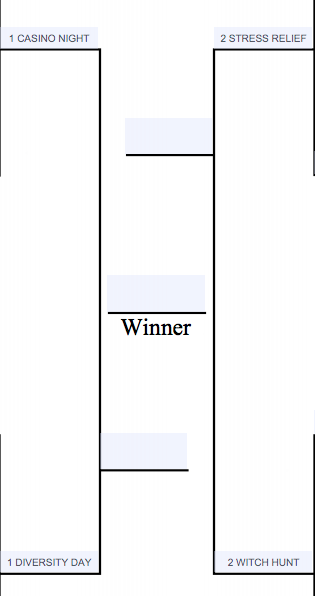 Best random Michael quote of DIVERSITY DAY is..“This is an environment of welcoming, and you should just get the hell out of here.” – Michael to Toby.

Best random Michael quote of GAY WITCH HUNT is…”Oh, there’s Gil, Oscar’s roommate. I wonder if he knows.” – Michael to camera, right after Oscar came out of the closet. 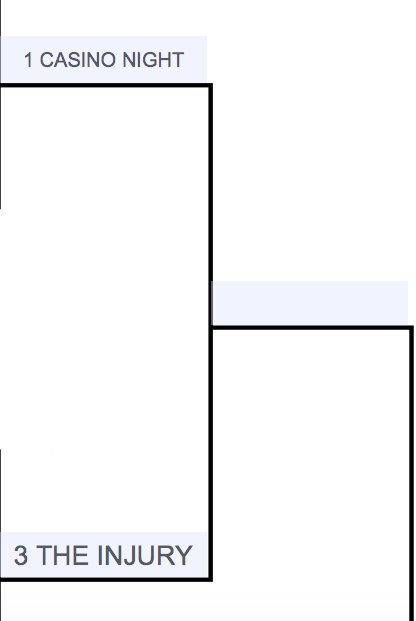 Worst part of THE INJURY is…that some people apparently didn’t know the rules of Shotgun in 2006? (1:10). I know that’s a lame pick again, but these two episodes don’t really have flaws. 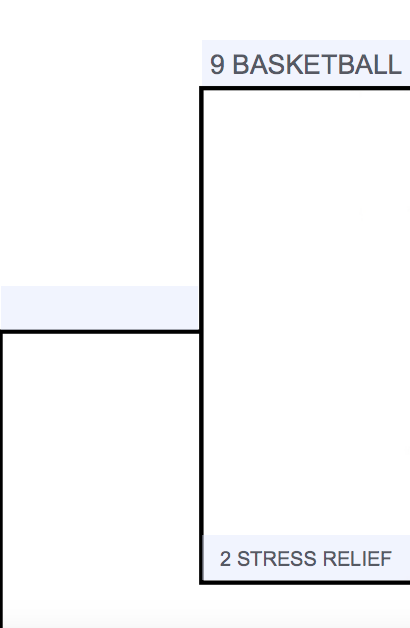 Worst part of BASKETBALL is…Michael. He’s essentially an unrecognizable character when you go back and watch this episode. The show was still attempting to emulate the British version at this point, so Michael’s character exists under the similar concept of “what if your boss was the biggest asshole in the world?” Don’t get me wrong…the aggressively non-PC version of Michael Scott is still funny. But I significantly prefer the version we grew to know and love, where Michael exists more as an idiot who will go to literally any lengths for approval.

Worst part of STRESS RELIEF is…Jim and Pam watching the bootleg DVD with Andy. This hour-long episode aired directly after the Super Bowl, so they had more time and money to work with. Those extra resources turned into this subplot featuring Jack Black and Jessica Alba, which ended up being way more weird than funny. 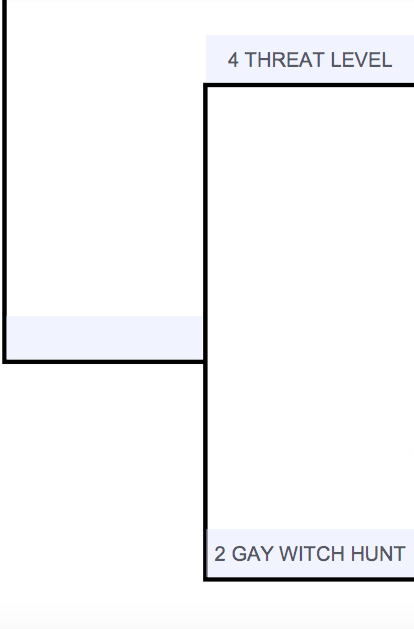 Worst part of THREAT LEVEL MIDNIGHT is…the callback to Jan (0:43). There are some amazing ones to old characters in this episode (shoutout Karen), but Jan’s was underwhelming.

Worst part of GAY WITCH HUNT is…how poorly some of the dialogue has aged. Even though this episode is a classic specifically because of how far it crosses the line, some of Michael’s homophobic slurs to Oscar catch you so off guard nowadays that you can’t believe this episode aired on NBC in 2006. 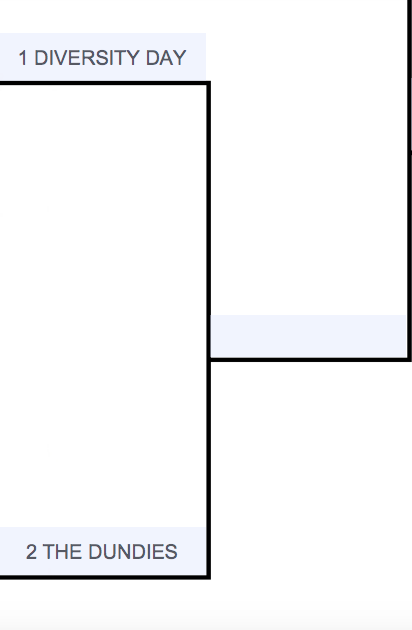 Worst part of DIVERSITY DAY is…Jim. This is a bit of a stretch, especially considering “not a bad day” is probably Jim’s best line of the entire series. But his character was not nearly developed yet. It’s strange to rewatch this episode and see Jim care a lot about work and call a girl “hot” (1:03).

Worst part of THE DUNDIES is…Ping. He ranks near the bottom of my list of Michael’s go-to characters. I feel like this might be a reference to something that’s going completely over my head though? If not, then yeah it’s just a lazy and mildly funny Asian impression. 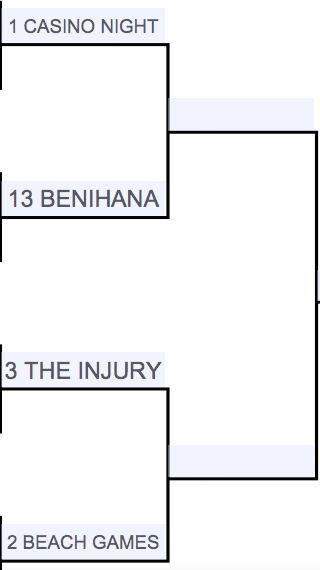 1. CASINO NIGHT vs. 13. A BENIHANA CHRISTMAS

Episode MVPs of A BENIHANA CHRISTMAS are…Pam and Karen…for having more people show up to their Christmas party.

Episode MVP of THE INJURY is…Dwight…for being nice to Pam and for dropping an A+ “that’s what she said” in front of Michael (3:28).

Episode MVP of BEACH GAMES is…Pam…for doing the coal walk, calling out the office for treating her like shit, and telling the truth to Jim. Huge episode for Pam. 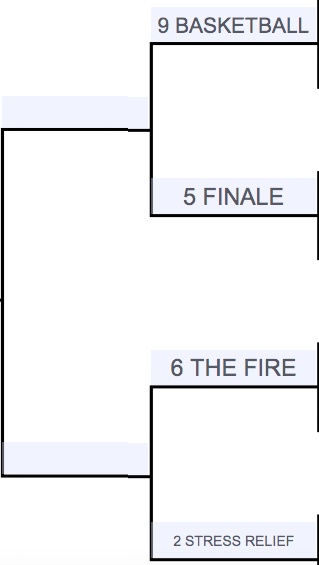 Episode MVP of FINALE is…Dwight…for burying the hatchet with Kevin, reuniting with Michael, and marrying Angela.

Episode MVP of THE FIRE is…Michael…for being the first one out of the building.

Episode MVP of STRESS RELIEF is…Dwight…for somehow not getting fired.

Episode MVP of DINNER PARTY is…Jan’s assistant, Hunter…for gracing us with “That One Night.”

Episode MVP of THREAT LEVEL MIDNIGHT is…Michael…for finally finishing his passion project, even if he realizes that it actually sucks.

Episode MVP of GAY WITCH HUNT is…Oscar…for getting three months paid vacation and use of a company car to not sue Dunder Mifflin for Michael outing him. 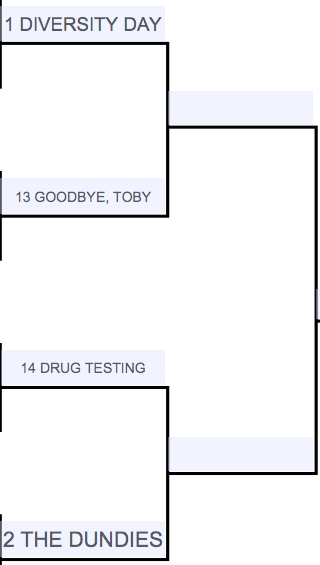 Episode MVP of GOODBYE, TOBY is…Phyllis…for gaining the upper hand on Angela after she catches her hooking up with Dwight.

Episode MVP of THE DUNDIES is…Ryan…for winning the “Hottest in the Office” Dundie.

SCRANTON REGION – ROUND OF 32 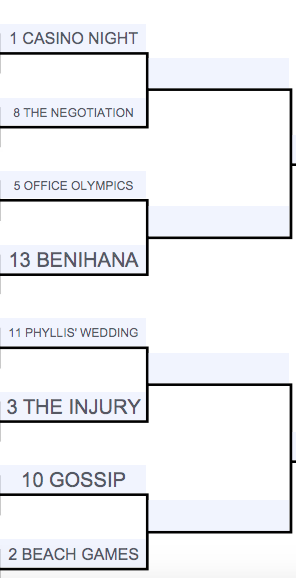 1. CASINO NIGHT vs. 8. THE NEGOTIATION

CASINO NIGHT…also known for: “Why are you the way that you are?”

5. OFFICE OLYMPICS vs. 13. A BENIHANA CHRISTMAS

THE INJURY…also known for: Dwight’s concussion.

GOSSIP…also known for: Michael telling everyone about Stanley’s affair.

STAMFORD REGION – ROUND OF 32 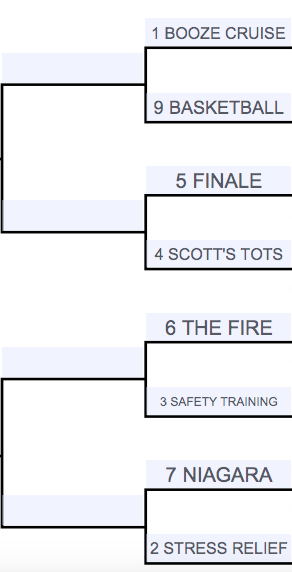 FINALE…also known for: “I wish there was a way to know you’re in the good old days before you’ve actually left them.”

THE FIRE…also known for: Who would you do?

STRESS RELIEF…also known for: The Roast of Michael Scott.

NASHUA REGION – ROUND OF 32

THE MERGER…also known for: Michael trying to push Tony Gardner onto the table.

THE CONVICT…also known for: Andy hitting on Pam. 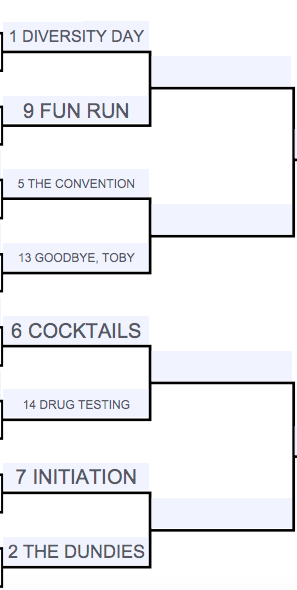 GOODBYE, TOBY…also known for: Michael giving Toby a rock as his going-away present.

COCKTAILS…also known for: Pam and Roy breaking up for good.

DRUG TESTING…also known for: “You look like you want to tell me something.”

SCRANTON REGION – ROUND OF 64 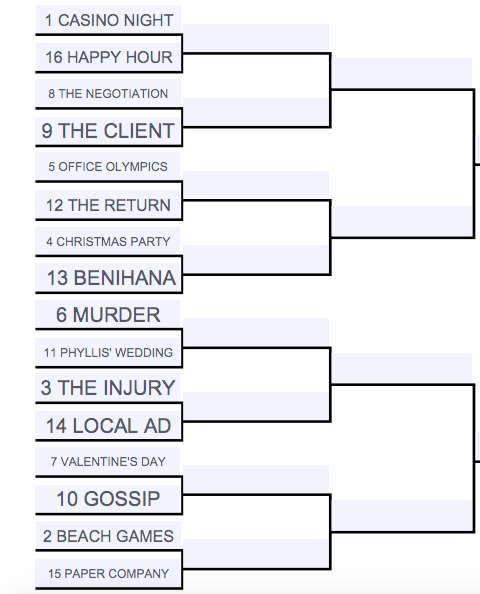 THE CLIENT…best known for: Michael holding the business meeting at Chili’s.

OFFICE OLYMPICS…best known for: Phyllis beating Kevin by a nose in Flonkerton.

THE RETURN…best known for: Andy punching a hole through the wall.

A BENIHANA CHRISTMAS…best known for: Michael’s “Bros Before Hoes” speech.

MURDER…best known for: The standoff at the end of the episode. (Also Tube City.)

PHYLLIS’ WEDDING…best known for: “This is bullshit.” (Also Kelly’s emergency.)

THE INJURY…best known for: “I burned my foot.”

VALENTINE’S DAY…best known for: “The Faces of Scranton.”

STAMFORD REGION – ROUND OF 64 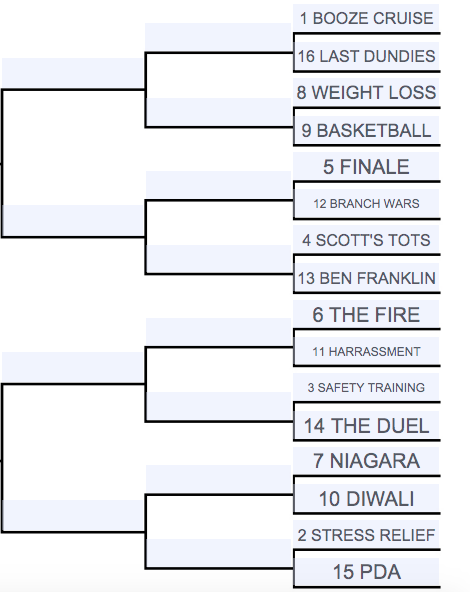 BRANCH WARS…best known for: This incredibly awkward conversation between Jim and Karen.

SCOTT’S TOTS…best known for: Being the most polarizing episode of the show.

THE FIRE…best known for: “RYAN STARTED THE FIRE!”

SEXUAL HARASSMENT…best known for: The debut of Todd Packer.

SAFETY TRAINING…best known for: The stress of Michael’s modern office causing him to go into depression.

THE DUEL…best known for: Andy using his Prius as a weapon.

NASHUA REGION – ROUND OF 64 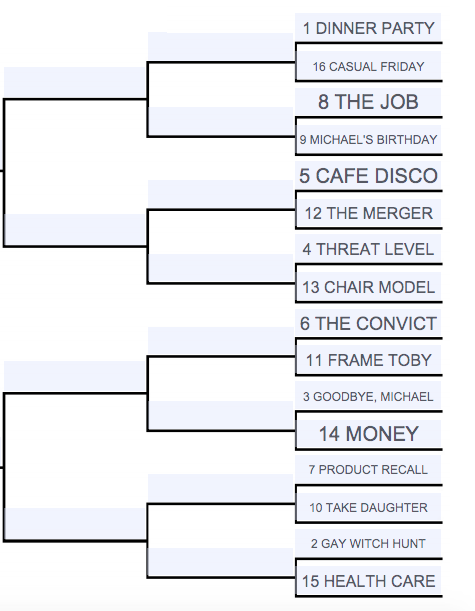 THE JOB…best known for: Jim asking Pam out.

THE MERGER…best known for: “Lazy Scranton.”

CHAIR MODEL…best known for: Phyllis trying to set up Michael with her friend.

THE CONVICT…best known for: Prison Mike.

GOODBYE, MICHAEL…best known for: Being the episode that should have been the series finale.

MONEY…best known for: “I DECLARE BANKRUPTCY!!!”

TAKE YOUR DAUGHTER TO WORK DAY…best known for: Stanley yelling at Ryan. 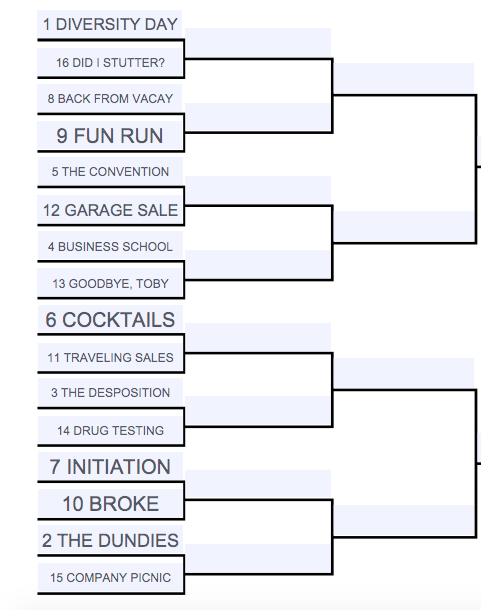 DID I STUTTER?…best known for: Stanley erupting at Michael.

BACK FROM VACATION…best known for: The topless photo of Jan.

FUN RUN…best known for: Michael hitting Meredith with his car.

THE CONVENTION…best known for: “I hope it’s urine.”

TRAVELING SALESMEN…best known for: Ryan taking the lead on the sales pitch.

DRUG TESTING…best known for: Jim convincing Dwight that he smoked the joint.